Upon your arrival in Alice Springs today you’ll be met at the airport by your friendly and professional safari crew. We then head to the Mercure Alice Springs Resort for check-in, followed by a comprehensive trip briefing with your fellow travellers. This evening, enjoy a welcome dinner in the hotel restaurant. Meals: D

Today the adventure begins as we depart Alice Springs and head east through the beautiful East MacDonnell Ranges. Our first stop is Corroboree Rock Conservation Reserve, an impressive dolomite structure which is an important sacred site in Arrernte culture. We then head on to Trephina Gorge, where a 20-minute walk takes us to a lookout with dramatic views over the surrounding country. After lunch, visit N’Dhala Nature Park and Ross River before arriving at Hale River Homestead on Ambalindum Station, right in the heart of the East MacDonnell Ranges. Set up camp and enjoy two nights in this beautiful location. Enjoy a late afternoon drink by the fire pit before dinner this evening in the Sydney William Shed, known as ‘The Workshop’. Meals: B.L.D

Officially central Australia’s first town, Arltunga was once a site of hope, struggle and mateship for many fortune hunters who came to the area on foot to find gold in the 1880’s. Enjoy a guided walk here (easy grade) to the Golden Chance Mine and visit some old stone houses that are perhaps some of the most well-constructed stone dwellings in the Northern Territory. Using only dry dirt due to a lack of water, the high level of workmanship is evident in their construction.

After morning tea we continue to Ruby Gap, driving along the Hale River bed for part of the journey. Enjoy lunch and explore the area before returning to Hale River late this afternoon. Dinner this evening is again in ‘The Workshop’ with an open fire (meals supplied by Hale River Homestead). Meals: B.L.D

This morning we bid farewell to Hale River Homestead and follow the official Binns Track through to Pinnacles Bore. From here, we follow the Pinnacles track through to the Plenty Highway before arriving at Gemtree mid-morning. After some morning tea, visit the original Mount Riddock Homestead, relocated to Gemtree where interesting story boards of a past pioneering way of life are displayed.

We then trek east along the Plenty to Harts Range, an area popular with gem fossickers and home to one of the most isolated police stations in the world. Interestingly, between the 1890’s and the close of the mine in 1960, almost all the nation’s mica came from this area in the Northern Territory. Enjoy lunch and a look around before heading further north on the Binns Track past MacDonald Downs. The property was originally settled by Charles Chalmers and his wife Cora in the early 1920’s. A school teacher from Mungindi in NSW, Charles dreamed of one day being a farmer and moved to the area, against all advice from family and friends. A fascinating story, and one of your guides will offer more details this evening around the camp fire at Derry Downs, tonight’s overnight stop. Meals: B.L.D

This morning we depart Derry Downs and once again follow the Binns Track north. Briefly travel the Sandover highway, the linking track between Mt. Isa and Alice Springs, before continuing north up to the Iytwelepenty / Davenport Ranges National Park – one of the most beautiful and least known Parks in the country. Here we tackle the Frew River Loop 4WD track and make our way to an area known as Old Police Water Hole, one of the most scenic and tranquil parts of the National Park and the perfect spot to set up for a two-night stay. Meals: B.L.D

The Iytwelepenty / Davenport Ranges National Park protects the important environmental zone between the Top End and Central Australia. The Park covers an area of 1,120 km² and is bordered by several pastoral leases and lands of The Anurrete Aboriginal Land Trust. It’s a serene oasis that few have ever visited, and to this day it remains very much ‘off the beaten track’. In terms of bird watching, black-faced cuckoo shrikes, rainbow bee-eaters, spinifex pigeons, diamond and peaceful doves, flocks of budgies and myriad honeyeaters are all common in the area. Today we enjoy a number of short guided walks exploring and embracing the park’s peaceful waterways and stunning gorges. Meals: B.L.D

Time to saddle up again and continue our journey along the Binns Track. Today we pass through Epenarra before turning west towards the Stuart Highway. Briefly travel south to arrive at Karlu Karlu / Devils Marbles Conservation Reserve for an early lunch. Marvel at this exquisite natural wonder before trekking further north to Tennant Creek, where we overnight in accommodation at the Bluestone Motor Inn. Catch up on some washing before enjoying dinner this evening in the motel restaurant. Meals: B.L.D

After breakfast we’ll visit the Battery Hill Mining Centre for an underground mine tour before heading north on the Stuart Highway. Pass through Renner Springs and the historic Newcastle Waters Station before heading west on the Buchanan Highway. Shortly after crossing the Australasia Railway we’ll make camp for the night. Under the desert stars your experienced guides will fill you in on the area’s fascinating droving history and infamous Murranji Stock Route. Meals: B.L.D

After an early breakfast we pack up camp and continue west to Top Springs. After a brief stop, we head on to one of the most iconic cattle stations in the country – Victoria River Downs (or VRD as it’s commonly referred to). Still covering some 2.5 million acres and running 33,000 head of cattle, the station has been a stock breeding powerhouse since it was established back in 1880.

This afternoon we head up to the Victoria River Research Station on Kidman Springs, the Territory’s principal pastoral research centre occupying 34,000 hectares in the heart of the Victoria River district. The station’s research projects have had a lasting impact on the productivity of the north Australian cattle industry and on the sustainability of the pastoral landscape. After a preview of the operations we head back down to VRD, where we make camp under the shade of some old Mahogany trees on the station. Meals: B.L.D

This morning we depart VRD and enter the Judbarra / Gregory National Park, the Territory’s second largest park jointly managed with Traditional Owners. The park features some spectacular scenery, some of which we’ll be exploring today. As we travel along the Humbert Track, we’ll pass by Top Numbert Yard and Fig Tree Yard before arriving at Bullita Homestead. The track is slow going in places, but the scenery is well worth it! On the banks of the East Baines River, the old Bullita Homestead and stockyards are a reminder of the park’s pastoral history and great place to set up camp. Enjoy a wander through it's historic buildings before dinner under the stars. Meals: B.L.D

This morning we take a short drive to picturesque Limestone Gorge. For those interested there’s an easy to moderate 1.8km return walk that winds its way through the limestone landscape with views over the East Baines River valley. Then, we’ll take the Tuwakam Track across to the Buchanan Highway where we visit Jasper Gorge and set up camp for the night. Meals: B.L.D

Today we depart Jasper Gorge and head into Timber Creek, the official end point of the Binns Track located on the banks of the Victoria River. We then head west and visit the Gregory Tree before continuing on towards the Western Australia border, arriving at Lake Argyle for a picnic lunch.

This afternoon we enjoy a spectacular cruise down the Ord River to Kununurra. Learn about the Ord River Irrigation Scheme from your knowledgeable skipper on this extraordinary 3-hour adventure, arriving into Kununurra just as the sun sets on the horizon. Here you’ll be met by your expedition crew before being transferred to the Kununurra Country Club Resort for the final night of the adventure. Tonight, we gather for dinner at the hotel restaurant and celebrate our adventure along the Binns Track. Meals: B.L.D

Enjoy breakfast and a leisurely morning before being transferred to the airport. Then, board your Air North flight to Darwin (please enquire for flight times). Bon Voyage! Meals: B 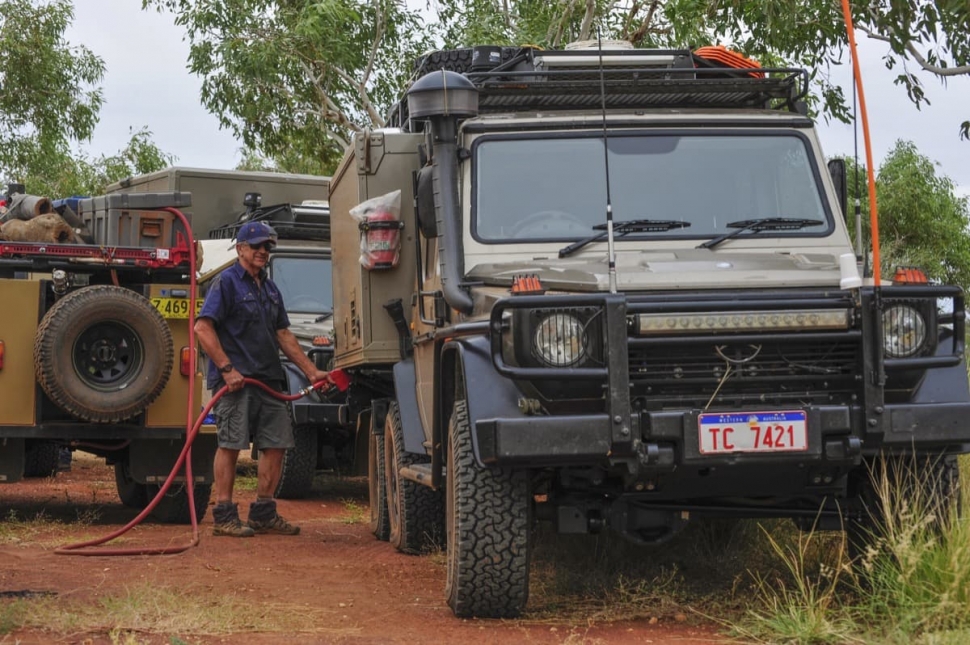 In remote areas like Binns Track, having a skillful team provide back-up when required is crucially important. Not only does Outback Spirit have the right personnel, our G-Wagon depot in Broome also features a massive spare parts warehouse in case of any mechanical issue. 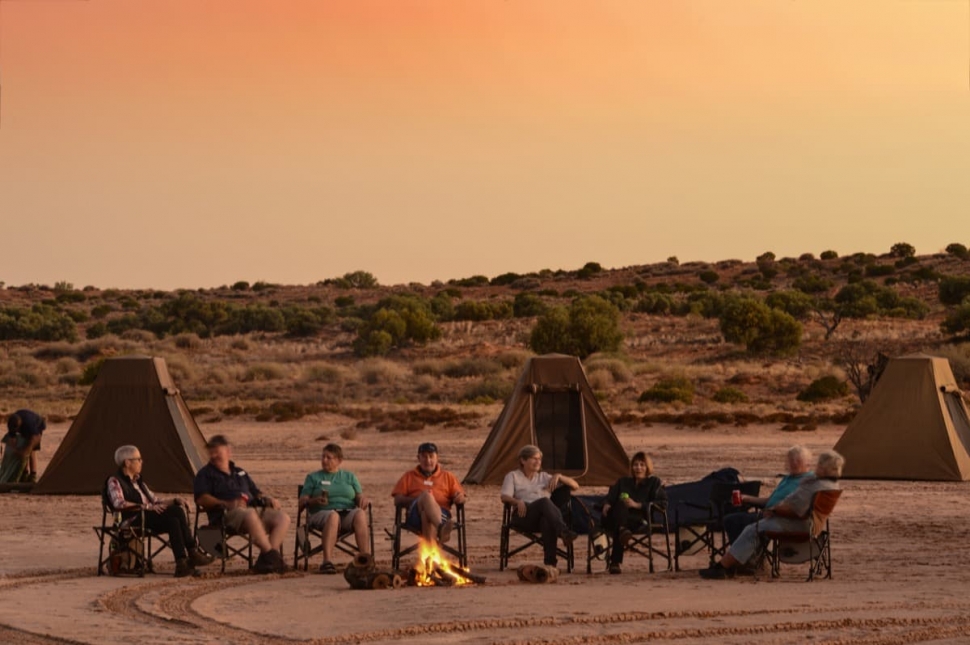 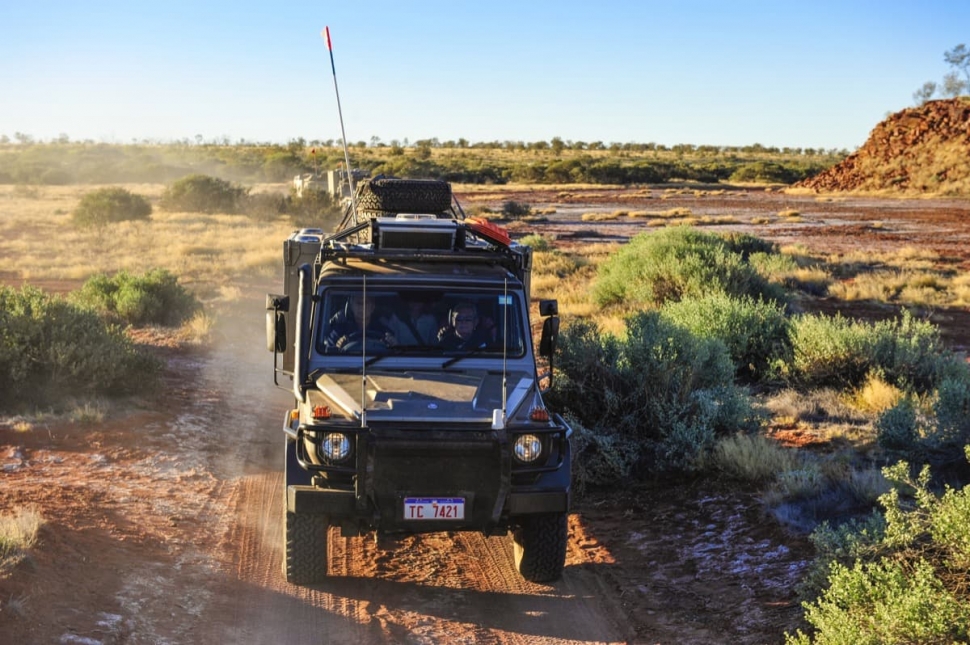 Binns Track is extremely demanding on vehicles, but the remarkable Mercedes Benz G-Wagon takes it all in its stride. With two fleets consisting of military grade 6x6 and 4x4 vehicles, nothing else comes close in terms of reliability, capability, comfort and safety. 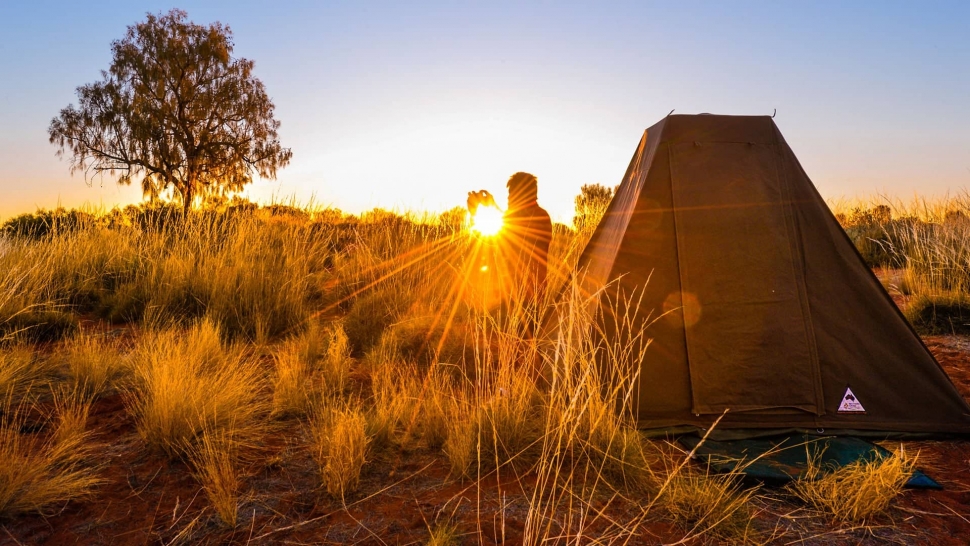 Outback Spirit regards certain basic comforts as non-negotiable. That’s why you’ll enjoy the convenience of proper amenities for your adventure, including hot showers and flushing toilets. No other desert tour operator can get close to this level of sophistication. 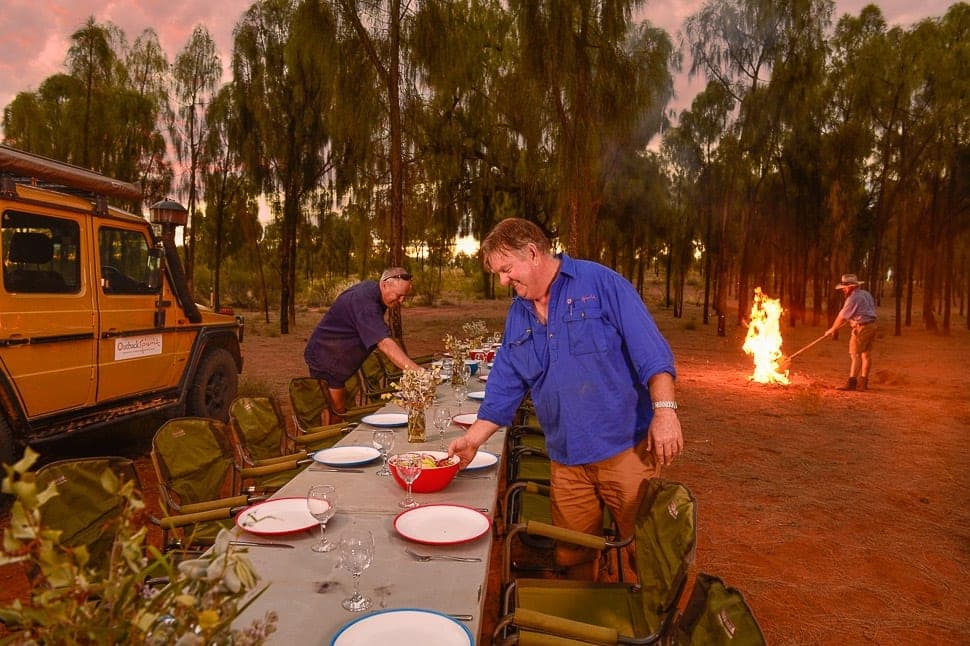 Outback Spirit’s desert safari drivers are highly experienced in remote, off-road touring. Across each team of 5 crew members, there are countless strengths required for a successful expedition, such as mechanical know-how, catering skills and an in-depth knowledge of the desert environment.

This tour operates during the following months. Please select a month to view departure dates.

All tour fares quoted are per person twin share A single supplement of $550 applies for solo travellers
Questions? Contact Us
Freecall 1800 688 222
Request A Brochure

More Adventures You Will Love 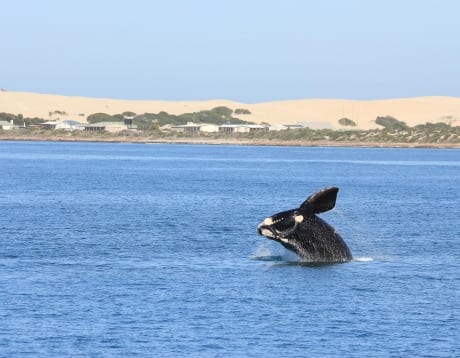 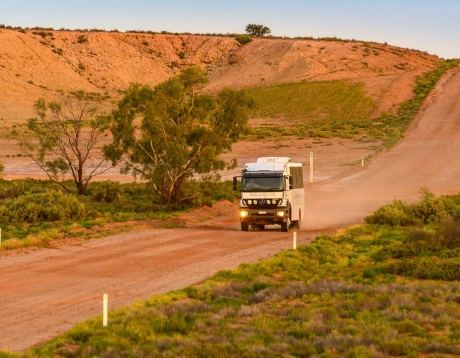 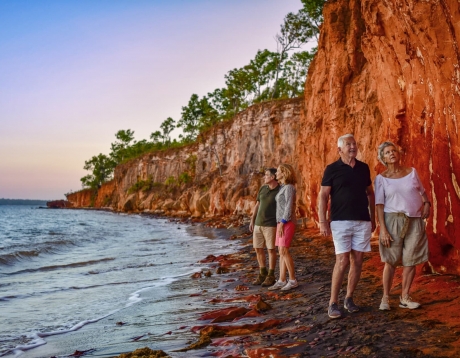 Sign up to receive our latest news & exclusive offers

Sign up to receive the latest news, exclusive offers and much more from Outback Spirit.

Fill in your details below to receive a copy of our 2023 brochure, or click the link below to download the digital version.